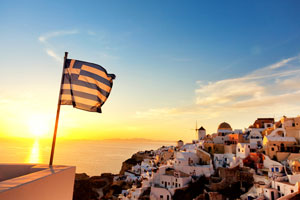 U.S. stock futures for Monday, July 13, surged more than 118 points from Friday's close on news that Greece has reached a last-minute deal with international creditors to address its debt crisis. The deal will force Greece to submit much of its sovereignty to international creditors in order to secure an 86 billion euro bailout package to prevent a default and possible exit from the European Union.

It will be interesting to see how Greek voters react after its prime minister, who was voted in on an anti-austerity platform, reversed course and accepted a bailout deal after 61% of its citizens voted against accepting austerity measures. As Money Morning Special Contributor Michael Lewitt explains, the deal is just another sign that idiocy has no borders and that ultimately the other shoe is going to drop when the markets wake up.

On Friday, the Dow surged 211 points on widespread optimism that Greece was approaching a deal with international creditors to avoid a default.