I just came back from an Alaskan cruise where I paid up and bunked on the top floor.

The room was smaller than the pictures, but the cruise was good.

The conversation, however, was excellent – and for us, very fruitful.

You see, I was able to connect with several foreign business owners and chief executives, and even a fellow trader who happened to be aboard ship.

Naturally, the talk turned quickly to Greece and China. The overwhelming consensus among us was that things in Europe would get worse before they got better.

Here's Where the "Other Shoe" Will Really Drop

The United States has its own debt problems, of course. But for the time being, the Fed can print its way out of trouble – interest rates are likely to stay low for now. And investors see the U.S. as a safe destination in the "flight to quality" that happens at times like these.

Rather, the next debt crises are likely to come from some of the Eurozone's "Southern Tier" economies: Portugal and Italy.

You see, the European Central Bank is going to keep printing euros to bail out the countries that wined and dined, but skipped out on the bill.

That's why savvy investors are betting on parity between the dollar and the euro by the end of the summer.

And the technicals agree. Have a look at this chart…

The Clearest Signal Yet That This Is the Trade Right Now

This chart is a 1-year daily showing the 30% downward slope of the Guggenheim CurrencyShares Euro Trust (NYSE Arca: FXE). 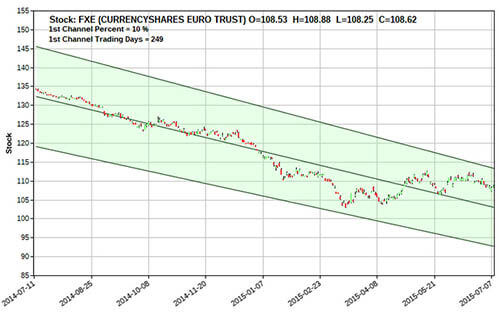 This fund tracks the performance of the euro, and it's 30% weaker than it was a year ago.

Clearly, if this trend continues, we can reasonably expect to see the fund touch 100 in the next month or so.

Here's How to Make the Trade