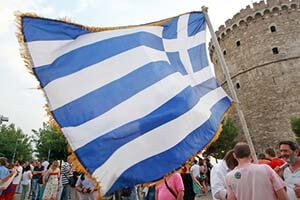 Markets are breathing a sigh of relief now that Greece has negotiated a new bailout plan with its Eurozone creditors.

But what will happen to Greece now?

Under the austerity conditionality of two bailout plans authored by the European Central Bank, the European Commission, and the International Monetary Fund – the troika – totaling 240 billion euros ($268.8 billion) over the last five years, we've seen the results…

Greece's unemployment rate is close to 26%.

Now it's safe to assume this labor crisis will only deepen…

What Will Happen to Greece Now?

"The dysfunctional and bankrupt Hellenic State will continue to be funded for a couple of more years – after which they'll have to go through this moronic exercise all over again," Money Morning Special Contributor Michael E. Lewitt said. "Nowhere in the proposed deal between Greece and its creditors is there any write-down in Greece's hundreds of millions of euros of debts or any recognition that the Greek people will continue to suffer inside the currency union."

Despite the Greek electorate voting the Syriza party to power in the most recent election – on a platform of abandoning austerity and rejecting bailout loans – and a decisive "no" vote on more bailout loans on a public referendum last week, little has seemed to change.

Greek Finance Minister Yanis Varoufakis, who has been advocating for a sharp write-down in Greek debt, stepped down after the referendum. And Prime Minister Alexis Tsipras capitulated, agreeing to even more harmful austerity measures to access more bailout loans.

"Having allowed its populace to self-immolate and vote against accepting the demands of its creditors, the Syriza government caved to precisely those demands, and now the world will wait to see if the rest of the European governments will be dumb enough to fall for this charade," Lewitt said.

The most recent bailout efforts are yet another exercise in "extend and pretend." It's very clear that Greece has no ability to pay back its debts. And at this point, extending even more loans to an already insolvent country promises only to bring this debate back to the forefront once it's clear Greece can't pay back this bailout.

So, why does the madness continue in Europe?

I agree with most which was said above, but interpret the intentions of the Euro group slightly differently. The agreement is clearly designed to get Greece out of the Euro zone without actually expelling it.

The only way Greece can survive this debacle is to voluntarily exit, re-establish the Drachma or similar, which will allow them to devalue it against major world currencies, thus establish a degree of livability within the country and some competitiveness with other countries. Unfortunately the country does not have a whole lot to offer other than tourism. Feta cheese, yogurt, olives and olive oil are not the kind of commodities with the power to pay off 200 to 300 billion Euros.

That brings me to my next assumption: Once Greece has departed the Euro zone (cancer removed), it will be unavoidable to severely cut its horrendous debt load. That will clearly not happen before Greece departs, since it would only delay the Grexit, much desired by the other 18.