Wall Street ties to our nation's capital are more prevalent than ever as the 2016 election approaches.

Sure, the "Washington-Wall Street Corruption Corridor" was exposed for what it is when the financial crisis came to a head in 2009, but only one Wall Street exec was ever actually convicted. (Credit Suisse Group AG's former global head of structured credit, Kareem Serageldin, was sentenced to 30 months in prison on Nov. 22, 2013 for his role in a scheme to artificially inflate subprime mortgage bond prices.)

Most of them are still in the game – the same politicians and policymakers; the same bankers and CEOs.

Does this 2016 Presidential Candidate Have Ties to Wall Street? 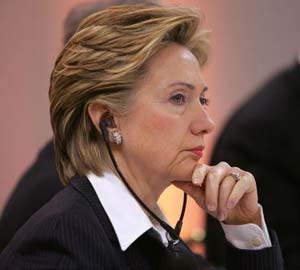 We had to shake our heads when we saw the tactic the Hillary Clinton 2016 campaign decided to run with the week following her bid announcement on April 12.

She would attempt to be cast as "Hillary Clinton, the Populist."

In a New York Times profile published April 21, Sen. Clinton called for a "toppling" of the 1%. Here's an excerpt from that piece:

"In a meeting with economists this year, Mrs. Clinton intensely studied a chart that showed income inequality in the United States. The graph charted how real wages, adjusted for inflation, had increased exponentially for the wealthiest Americans, making the bar so steep it hardly fit on the chart.

Mrs. Clinton pointed at the top category and said the economy required a "toppling" of the wealthiest 1 percent, according to several people who were briefed on her policy discussions but could not discuss private conversations for attribution."

But as The Anti-Media founder Nick Bernabe was quick to point out in an April 21 op-ed, toppling the 1% would not be in the best interest of the people who've bankrolled Sen. Clinton's rise toward the nation's top position.

Just look at the weighty names on this list of Hillary Clinton's biggest campaign contributors over her career since 1989: