In a move that shocked millions of investors, Morgan Stanley (NYSE: MS) told clients on the morning of July 7 that media darling Shake Shack Inc. (NYSE: SHAK) was too expensive and offered "brand related optimism that is not supported by fundamentals."

The firm then went on to point out that the company's fundamentals did not merit such an expensive valuation, that it was illiquid, and that investors had become "over-exuberant."

In fact, I told you as much on May 29 - a full five weeks earlier than Morgan Stanley's "Johnny come lately" report.

How did I know?

It certainly wasn't because of the headlines. Here's just a few that were making the rounds at the time:

... Three Reasons the Shorts on Shake Shack Are Wrong - The Street

It's no wonder millions of investors fell for the pie-in-the-sky thinking. Moreover, the willful ignorance among analysts and seasoned observers who should have known better was astonishing.

For me, the need for a Shake Shack shakeout all came down to one number.

Shake Shack's Collapse Was Foretold by One Number

A glance at the company's page on Yahoo! Finance would have told even the most casual observer that the company was dangerously overvalued, with a P/E ratio well above 1,200. To put that in perspective, that means the stock was priced at a level that would have required investors to wait 1,200 years to make money back on Shake Shack at the company's earnings rate.

By contrast, the S&P 500 carried a P/E ratio of barely 15, meaning that not only were there far better deals for investors out there, but also that the stock was an insane outlier when it came to  its valuation.

Of course, at some level the stock's trajectory tells us far less about Shake Shack than it does about the actors who fueled the artificial bull market. Before May 22, Shake Shack could do no wrong in the eyes of most analysts and financial publications.

The illusion was shattered shortly thereafter. 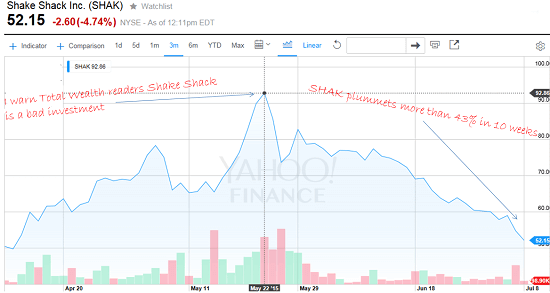 There are two key lessons here...