For July 14, 2015, here's what the Dow Jones Industrial Average, S&P 500, and Nasdaq did, plus the biggest stock market news you can't miss…

What Did the Dow Do Today? 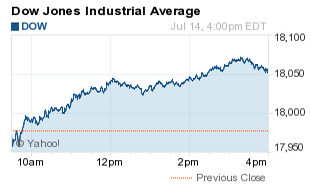 The DJIA today added 75 points, fueled by a rally in healthcare and energy stocks. Oil prices were on the rise as concerns about the potential impact of a deal to lift economic sanctions on Iran abated after traders recognized the amount of time it would require before the nation is able to bring its sector back to full capacity.

The earnings season kicked into gear with JPMorgan Chase & Co. (NYSE: JPM) and Wells Fargo & Co. (NYSE: WFC) reporting numbers on Tuesday. JPM stock was up 1.4% on the day, while WFC stock added 0.9%. JPMorgan beat Wall Street consensus earnings estimates in the second quarter by $0.10 per share. The company reported per-share earnings of $1.54 and said its revenue outpaced analyst expectations on stronger than expected growth in its mortgage business and a decline in legal costs.