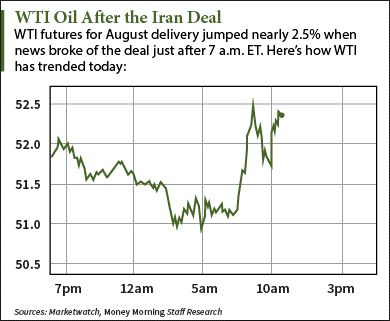 Today's move in crude oil futures followed monumental news that representatives of Iran, the United States, and other Western powers reached a final Iranian nuclear deal. The deal came after years of talks and two weeks of long meetings over how to limit the Middle Eastern country's nuclear activities.

"Today, after two years of negotiation, the United States, together with the international community, has achieved something that decades of animosity has not: a comprehensive long-term deal with Iran that will prevent it from obtaining a nuclear weapon," President Obama said from the White House this morning. "This deal is not built on trust. It's built on verification."

The many terms of the deal include limiting uranium research and increasing inspections of uranium mining and production facilities.

But the most significant tenets of the deal involve Iran's export sanctions. In exchange for reduced nuclear research activity, the country is allowed to start producing and exporting more oil. Many analysts believe this new capability will flood more oil into an already oversupplied market and push prices lower.

You are being naive your country has a 20 trillion federal debt and state and city debt is another 30 trillion you're in the same situation that Germany was in the 1930 s. The problem is you have a left wing government all it wants to do is tax and unfortunately Hillary Clinton will continue the sell out of America while grovelling to Islamic extremists
Russia and China. With your debt and your economy destroyed how can you buy energy
oil, gas. nuclear etc.
Thank You Robert Butt

So essentially nothing has changed for August deliveries, as far as Iran is concerned, as they will not be getting their oil shipped in time for August.

And that is supposed to explain why oil futures are up?

I get the bit on Why the Iran Deal Won't Lower Crude Oil Futures" but it seems to me that's an answer to a different question.