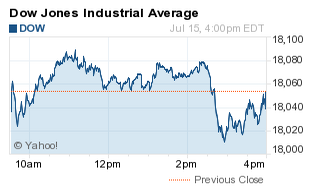 The DJIA today snapped a four-day winning streak and slipped a little more than 3 points as turmoil abroad offset positive sentiment about the U.S. economy and a pending interest rate decision by the Federal Reserve. In Greece, Greek anti-austerity protesters rioted over the nation's planned $95 billion bailout acceptance and threw petrol bombs at police. The rioting caused the Greek parliament to close and police to administer tear gas to disperse the crowd.