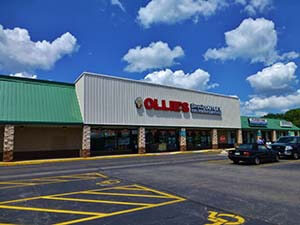 That means initial investors saw an instant gain of 41.3% when OLLI stock hit the market this morning.

The total number of outstanding shares is 8.9 million. At $22.60 a share, Ollie's Bargain Outlet has a market capitalization of $1.2 billion.

Ollie's Bargain Outlet Holdings Inc. is a chain of closeout retail stores based in Pennsylvania. The company sells merchandise obtained from various retailers through either closeouts or bankruptcy sales. They offer brand-name merchandise at up to 70% off other retail store prices.

If it follows the typical first-day trading pattern for IPOs, the Ollie's Bargain Outlet (Nasdaq: OLLI) stock price today will soar. According to Renaissance Capital, a manager of IPO-focused ETFs, the average first-day pop for IPOs this year has been 16%.

But there's one factor mentioned in Ollie's IPO prospectus that could threaten the company's profitability and stock price over the long term...

The company's ability to profitably expand its number of locations will greatly influence how the Ollie's Bargain Outlet (Nasdaq: OLLI) stock price performs down the road.

In its IPO filing, Ollie's said it has the means to profitably expand to more than 950 U.S. locations within the next few years despite accumulating over $150 million in debt since 2013.

"We expect our new store openings to be the primary driver of our continued, consistent growth in sales and profitability," the filing read.

The Bottom Line: The Ollie's Bargain Outlet (Nasdaq: OLLI) stock price followed the standard IPO pattern by opening much higher than its IPO price. OLLI stock will likely soar throughout the day - but those gains won't last. The company's ability to increase its number of stores while still turning a profit will dictate where its stock price moves over the long term.

How to Safely Profit from Any IPO: Investing in newly issued stocks can seem like an exciting way to earn huge profits. But with institutional investors and other Wall Street "VIPs" cheating the market for quick gains, the IPO process is a rigged game nowadays. That's why we've outlined the three best IPO investing rules to follow for any new stock. Check them out here...