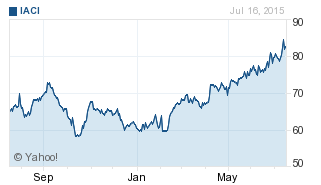 IAC announced on June 25 that it plans to turn The Match Group, comprised of several dating sites including Match.com, into a public company. Barry Diller, who controls IAC, said it is "healthy" to give companies "independence from a mother church."

Still, IAC plans to issue less than 20% of its shares in the initial public offering. So, Match.com will remain majority-owned by its parent.

Over the last decade, The Match Group has been an aggressive acquirer of "socializing" websites. Under the company's expanding umbrella are dating sites such as OkCupid, OurTime, and Tinder. In the last year, it added fitness website DailyBurn and The Princeton Review, the test preparation and college admission services company.

Just this week, The Match Group announced it would buy dating site PlentyOfFish for $575 million in cash. It's Match's largest deal ever. PlentyOfFish claims to have more than 3 million active daily users. It's free for users but offers premium services.

The Match Group's online dating businesses, with 3.4 million subscribers, posted $240.9 million in operating profit for 2014, a 6% year-over-year revenue rise, according to a U.S. Securities and Exchange Commission filing. In Q1 2015, The Match Group recorded revenue of $239.2 million, roughly 30% of IAC's $772 million revenue.

"The Match Group is poised for substantial growth in the coming years," Gregory R. Blatt, who will remain the company's chairman, said in a news release. "The dating industry has come a long way since its inception, but the category remains underpenetrated."

Profiting Now from the Match.com IPO

Money Morning Capital Wave Strategist Shah Gilani predicted on June 12 that IAC would do a Match.com IPO. That was about two weeks before the official announcement.

At the time, Gilani recommended shareholders of IAC hang on to the stock to get the then anticipated Match.com spin-off shares. He also said to pick up more should IAC shares slip.

"Whether you bought IAC shares or not, I recommend buying more shares (or opening a new position) if IAC dips to $77," Gilani said.

He's not expecting IAC shares to fall sharply for any reason other than overall market sentiment. Indeed, shares spiked 5.1% to $81.19 on news of the Match.com IPO. But increasing uncertainty plaguing U.S. and global markets could cause all stocks to take a hit.