Income inequality in many countries around the world, including the United States, has reached record highs. This is according to a new report from the Organisation for Economic Co-operation and Development (OECD).

But in the top 10 countries, those numbers were much larger. Mexico has the world's largest income inequality problem, with the top 10% earning 30.5 times more than the bottom 10%. The United States is third with 18.8.

Here are the 10 countries where income inequality is the worst: 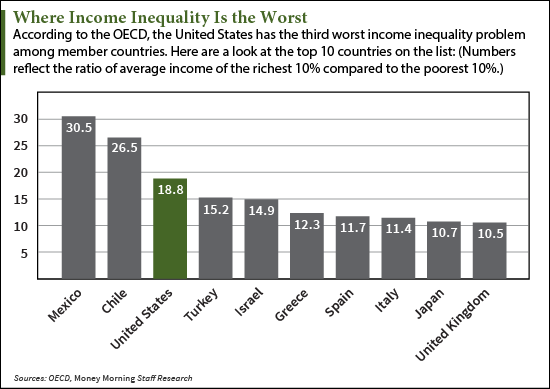 "We have reached a tipping point. Inequality in OECD countries is at its highest since records began," OECD Secretary-General Angel Gurría said in a report from May. "The evidence shows that high inequality is bad for growth. The case for policy action is as much economic as social. By not addressing inequality, governments are cutting into the social fabric of their countries and hurting their long-term economic growth."

The study also found that in the 18 OECD countries with enough data, the bottom 40% of earners owned just 3% of total household wealth. The top 10% controlled nearly 50%, while the top 1% alone controlled about 18%.

The OECD was founded in 1960 and currently has 34 member nations. They include many of the world's most advanced countries, but also some emerging countries like Mexico, Chile, and Turkey.

Editor's Note: As a special service to Money Morning readers, we're providing you with the Roadmap to Growing Rich from the Spin-Off Boom. In it, you'll find three additional spin-offs that could double your money this year. Click here to learn how to download your copy.

No Problem. Putative Democratic Party Presidential candidate Hillary Clinton has just proposed an increase in the capital gains tax. Looks like its headed back up from the bottom reached under the Bush Administration of 15%. Hillary once said she would never do it, but that was before we had added $ 9 Trillion in new national debt to the tally. When investors see a big tax increase coming at them, they will all want to sell and take some gains off the table at $20% before rates increase.

Someone always must "pay the piper" and that someone is anyone with anything to their name. Most voters ( majority ) do not own individual stocks and so capital gains are irrelevant to them. Capital Gains are largely exempt and also irrelevant for most homeowners, as well. Still, there is no free lunch for anybody in the end.

Interesting… conservatives and libertarians are starting to admit that extreme income inequality is not good.

But the chart implies a conclusion opposite to that in the text. In the chart, the countries with the lowest income inequality are growth basket-cases. Greece, Spain, Italy, Japan, and the UK do not make one think that low income-inequality brings about growth. Yet the text of the article presents the OECD statement, "The evidence shows that high inequality is bad for growth." The editor of this article would have served readers better by shining more light on this subject — and specifically by critically analyzing the agenda-serving rhetoric given in the quoted statement. What readers do not want more of is material that is agenda-driven as well as superficial, if not false. Such material is indistinguishable from propaganda — authors of which deserve no place in any citizen's list of information sources.