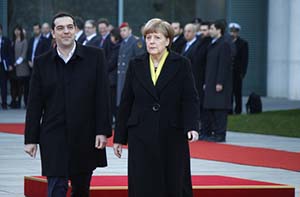 U.S. stock futures for the Dow Jones Industrial Average today were mixed. Dow futures forecast a slight 9-point drop from yesterday's Dow close, while the Nasdaq continued to rise after hitting a record on Thursday. The markets are keeping an eye on Germany, where the nation's officials are voting on whether the country should accept Greece's bailout and debt concessions as the European Union takes steps to prevent a "Grexit."

On Thursday, the Dow Jones rose 70 points after companies reported strong earnings and concerns about Greece abated due to the country's parliament voting in favor of austerity measures to receive bailout money. Greece officials announced that the nation's banks will reopen on Monday and that it is looking for ways to allow citizens to bunch 60-euro withdrawals over the next few days.