For July 17, 2015, here's how the stock market today performed, plus the top stock market news and stocks to watch based on today's market moves… 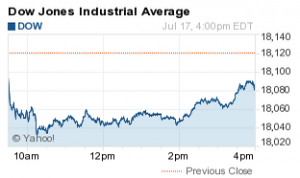 Shares of Google Inc. (Nasdaq: GOOG, GOOGL) surged more than 16% and hit intraday records on news that the company crushed earnings expectations. The company's Class A stock briefly jumped above $700 per share. The company added nearly $60 billion on Friday after the company said it has boosted revenue from its mobile and ad divisions.

The news abated concerns that rival Facebook Inc. (Nasdaq: FB) could cut into the search giant's YouTube business after its push into video.