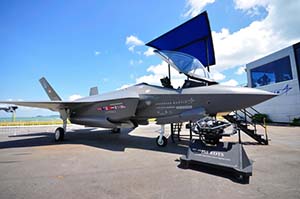 From an investment perspective, Lockheed Martin Corp. (NYSE: LMT) stock is a long-term buy-and-hold, largely because of the F-35 program.

The F-35, the next generation of fighter crafts to replace the current fleet, is a 56-year program. It will cost a total of $400 billion for the United States to procure 2,400 of these multi-role combat jets, and another trillion to service the fleet once they're rolled out. The $1.4 trillion price tag is daunting, but over 56 years that averages out to about $25 billion a year spread across the slew of contractors building this jet and its components - with the lion's share going to Lockheed.

Foreign governments will order another 600.

A lot of fair criticisms are leveled at the F-35. There have been cost overruns, software problems, and delays. But none of that is new to the federal contracting game and should come as no surprise for a jet that seeks to do everything for everyone.

"You're trying to use this kind of one-shoe-fits-all mentality," Money Morning Executive Editor Bill Patalon said. "You're trying to make it the main aircraft for multiple services - the Air Force, the Navy, the Marines - each of these folks has different requirements - dramatically different."

Here's why this discussion over the F-35 likely won't make a dent in the LMT stock price long term...

The LMT stock price has been rather sensitive to any news items related to the F-35 this year.

The plane is crap, it does not come remotely close to what it was meant to do. The Warthog still does the job best. Ask the grunts on the ground that need some cover.
As an investor & payer of taxes, as well as well a an ex service man I do not like wasting the tax payers money. It is a black hole & a money pit. A really expensive jobs program.
Take a look at what POGO (Project On Government Oversight)
As for a Congress person having balls enough to stand in the way and willing to pull the plug I applaud them. We need more that would see this plane for what it is…a boondoggle !
C.K. Hof