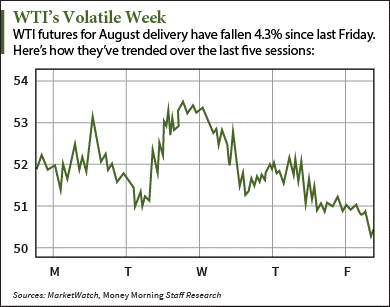 The Brent crude oil price was performing slightly better this morning. The international benchmark dropped just 0.33% to $56.72 a barrel. It's down 11.6% this month.

Two Reasons Why the WTI Crude Oil Price Is Down Today

The first reason why the WTI crude oil price is down today is supply numbers.

Oil prices are also falling as investors expect increased exports from Iran after a nuclear deal was reached on Tuesday. According to the terms of the agreement, Iran will be allowed to start ramping up oil exports in exchange for the country scaling back its nuclear weapons program.