The Microsoft dividend will rise again in September if the company follows a well-established pattern.

For the past nine years, Microsoft Corp. (Nasdaq: MSFT) has announced a dividend hike in September to be applied to the next quarter's payout. 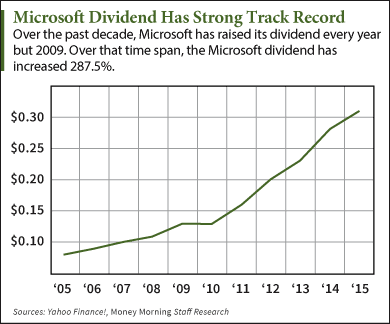 The annual increases have grown the quarterly MSFT dividend from $0.08 a share to the current $0.31. The current yield is 2.65%. The next regularly scheduled payout is Sept. 10.

The Redmond, Wash.-based company has increased its dividend payout every year in that span except for 2009, when the Microsoft dividend remained at $0.13.

Stocks that pay a dividend - and raise it regularly, as Microsoft has - are favorites of income investors. And for good reason.

But given that a Microsoft dividend hike is a near-certainty, the current question for investors in Microsoft stock is how big the hike will be.

Look for a Microsoft Dividend Hike Above 10%

Microsoft could also opt to raise its dividend by $0.05, a 16.1% increase. The last time the Microsoft dividend increased by $0.05 was in 2013, so it's not unprecedented. But given some headwinds the company is experiencing this year, look for MSFT to stick with the $0.04 increase.

Whether Microsoft can maintain these dividend increases depends on how well it can grow out of its historic dependence on its flagship Windows and Office products.

We'll know more about that when we get the Microsoft Q4 earnings tomorrow (Tuesday) after the market close...

What to Expect from the Microsoft Q4 Earnings

Here's what analysts are looking for from the Microsoft fiscal Q4 earnings:

Should I Buy Microsoft Stock? Wall Street is very conflicted about Microsoft these days, which is a big reason MSFT stock has remained relatively flat lately. But they're missing the big picture. Here's why Microsoft stock is a tremendous bargain right now...