For July 20, 2015, here's how the stock market did today, earnings reports, the top stock market news, and stocks to watch based on today's market moves… 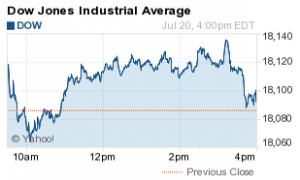 The DJIA today continued to rally to its seventh winning session in eight days, fueled by better than expected quarterly earnings reports. Meanwhile, the Nasdaq hit its third-straight record high as technology stocks continued to push the exchange higher.