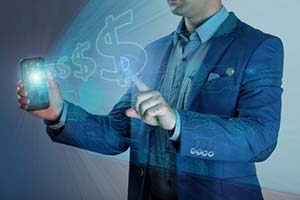 Dow Jones futures today (Wednesday) were forecasting a 63-point decline from yesterday's close after a number of big technology firms underwhelmed with their earnings reports. The markets could be in for a long day as the tech sector now waits until Thursday for Amazon.com Inc. (Nasdaq: AMZN) to report its quarterly earnings.

Yesterday, the Dow Jones fell nearly 1%, or 180 points, as revenue figures from large caps International Business Machines Corp. (NYSE: IBM) and United Technologies Corp. (NYSE: UTX) pulled down the index. The two stocks accounted for more than 100 points combined in the decline on the day.

IBM stock slumped more than 6.2% on news the company's revenue slipped for the 13th straight quarter. Meanwhile, United Technologies shares fell more than 7% after the company slashed its 2015 profit outlook. UTX stock had its worst one-day performance since 2001.