Years ago, when I was doing monthly analysis on Iran's oil and gas industry, one of the biggest quandaries was trying to make market sense out of what came from the leadership in Tehran.

Well, the past 72 hours and the July 14 Iran nuclear deal have brought me back to those days.

Back then, it was not unusual for Iran's religious and political heads to shoot themselves in the foot economically every time they opened their mouths on policy matters. And Iran remains one of the most convoluted webs of power relationships and brokerages anywhere. 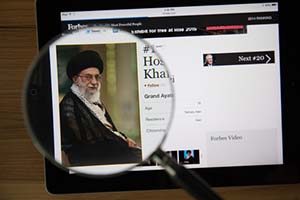 In fact... it is almost as if they want to bait the U.S. Congress into rejecting the deal.

The Situation in Iran Grows Worse

In return for the International Atomic Energy Agency (IAEA) monitoring its nuclear program, Iran for the first time in a decade has a genuine opportunity to increase oil and gas production, investment, and exports. All of which would inject very badly needed revenue into a domestic economy that collapsed some time ago.

As I have noted before, those who have warned about a flood of Iranian oil exports drowning the market simply do not understand how bad matters in Iran actually are.

Field operations are, frankly, a mess. The exchange of domestically trained technical personnel for experienced but now cut-off Western services has been a failure despite Chinese assistance, Iran's broader banking networks are illiquid, and there are few knowledgeable oil people left in Iran's oil ministry or state oil company.

Iranians have known deprivation, crippling inflation, high unemployment, a rapidly devaluing local currency, and the lack of essential products before. Virtually the entire period following the 1979 Revolution has witnessed such fallout.

But there is no question about what the Western sanctions accomplish...

Good points all Dr. Moors, but I suggest another. The Republicans have visceral reaction to oppose anything connected to President Obama. Forgetting how well the tactic worked for Greece; Republicans are already talking of rejecting the deal to get a better.

Rejecting the deal will isolate the US from the Allies, who also negotiated the deal. Sanctions can not be maintained by the US alone and will only shut the US out of the Iranian market. Isolating the US diplomatically and economically, at little cost.

Oh, yeah …the same tactic has worked "soooo well" for Greece (?!!) which is why Greece teeters on several brinks of disaster.
Visceral reaction to Obama–that's what you're going with?
Ignore the facts, blame the alleged intangibles and cast aspersions against those who see the same problems but have different and probably better answers.
Kat

I agree the US in house division is isolating them from the world and it's believed allies. It seems as if some would risk the respect the US once had if it can be blamed on the failed policies of the current president. It does expose the depth of the corruption in the country and those involved.

I think if we are going to make a deal with Iran it should of made them come completely clean with zero tolerance with any type of conflict in their region. I don't think Americans should even be talking with them at all until they completely change their ways. Period