In just the last few trading days, the price of gold has tanked by $50 per ounce, or just over 4%.

Over the past month, gold has lost $100 per ounce, or 8.3%, bringing the yellow metal to its lowest in five years.

The gold sell-off has some precious metals investors' nerves rattled. Gold sentiment right now is worse than it has been with other sell-offs.

So what's really causing this gold price plunge, and, more importantly, what should you expect next?

What's Next for Gold After Bear Raid 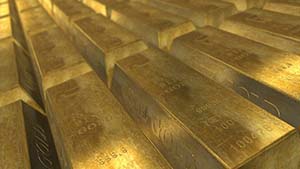 On Sunday night, when many markets were shut and liquidity was low, about $2.7 billion worth of gold futures were dumped on the Comex in under two minutes. At one point, in the space of a single minute, 7,164 contracts equal to about 22 tons were traded.

At a time of day with so little liquidity, and such a large volume being sold in a very short time period, it's hard to imagine the cause being anything other than forced selling for the goal of driving gold's price lower.

According to The Wall Street Journal, "In Shanghai, close to five metric tons of gold was sold on the Shanghai Gold Exchange in a two-minute window just before 9.30 a.m. local time, in a market where the normal daily volume traded is 25 tons, the ANZ report said."

"ANZ added that there was an unusual spike in trading volumes in a gold futures contract in U.S.-based Comex, just before Shanghai opened."

Ross Norman, chief executive of bullion brokerage Sharps Pixley, said the volume of selling in such a narrow window suggests a careful effort to short the market and bears no relation to market fundamentals.

Since this attack on gold followed China's gold reserves report, some suggested this was a very strategic move…

The People's Bank of China reported an update last Friday to its official gold reserves.

I am curious to know if jewelers and those who give cash for gold go by the market price. For example, do they change their prices when things tank as described above? As a customer, how do we know when is the best time to sell our gold? I have recently inherited a lot of jewelry that is genuine gold from my grandma who just passed. I am going to keep her wedding ring and favorite necklace but other than that I am looking to sell the rest.