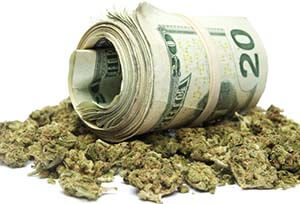 The growing, nationwide political climate is shifting in favor of marijuana legalization.

But finding the best pot stocks to invest in right now to capitalize on what promises to be explosive growth in the years to come is a conundrum.

And that's for one simple reason.

The most compelling companies currently in the space are not publicly traded.

The best opportunities are not those pot penny stocks that came about as a result of a reverse merger or as a self-underwritten public offering on over-the-counter markets. We already saw with the U.S. Securities and Exchange Commission crackdown last year that there was no shortage of shell companies looking to seize on the legalization efforts in Washington to orchestrate pump-and-dump schemes.

The truth is, if you want to strike it rich with pot stocks, you have to be a long-term angel investor or a friend to a private start-up, buy in now, and then wait for however many years it takes for that company to go public.

And that's not something individual investors can really do.

"Barring probably a couple of exceptions, the publicly traded space is probably one to avoid at this point," 4Front Ventures co-founder and managing partner Kris Krane told Money Morning. "It's just too volatile. There are too many shell games and reverse merger games and it's not a great space to look at right now."

The marijuana companies with the most potential, and perhaps the winning pot stocks at a future date, have an IPO at the back of their mind…

The best cannabis companies right now are looking for niches.

They aren't trying to make a run at cultivating the plant and selling the product in dispensaries. They aren't looking at the industry purely for its medical and recreational applications.

Jeremy Carr, who's looking to unveil BlazeNow, an iOS and web-based app to also be offered on Android, will provide listings for dispensaries as well as point-of-sale and inventory management services. BlazeNow represents a tech niche within the cannabis sector, an indication that there's more to pot stocks than just cultivation and distribution.

What's encouraging about Carr's venture is that he is focused on growing the business and breaking into the space. What he's not looking to do is dangerously pump up his stock price – like a lot of other players in the space did last year…