Any talk of commodity prices in 2015 has typically revolved around oil prices. That's because we're experiencing the worst oil price crash since the 2008 financial crisis.

WTI oil prices are down 48.5% in the last year. The U.S. benchmark closed at $48.85 a barrel Wednesday, its lowest settlement in more than four months.

But what most investors don't know is that oil is nowhere near the biggest loser among the most common commodities.

Here's how commodity prices have performed so far this year…

How Have Commodity Prices Performed in 2015? 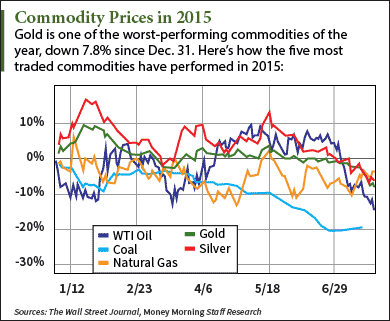 It's been a rough year so far for commodities, since most of them are priced in U.S. dollars. When the dollar strengthens, commodity prices weaken because the underlying products become more expensive to users of other currencies.

The two other main energy commodities, coal and natural gas, have also plummeted in 2015.

Futures for Central Appalachian coal – the benchmark for the New York Mercantile Exchange (NYMEX) – have tumbled 18.8% in 2015 as more power companies switch to natural gas. The U.S. Energy Information Administration (EIA) expects coal usage to decrease by 7% this year.

Despite seeing increased demand from declining coal usage, natural gas prices are still down 6.6% this year due to oversupply and mild weather.

With commodity prices down across the board, the question on investors' minds is…

Will Commodity Prices Rebound in the Second Half of 2015?