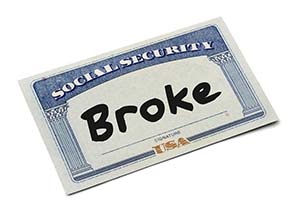 "When will social security run out?"

On July 22, the trustees answered with the release of their annual report. It was chock-full of likely scenarios, projections, and one big shocker….

According to the report: The funds supporting retirement and Medicare benefits are likely to run out by 2034.

It's important to note the trustees' estimates vary on a year-to-year basis (slightly, at least). Last year, they concluded trust fund depletion would occur in 2033.

But as it currently stands, when today's 48-year-olds will reach full retirement age, they will not have access to retirement/Medicare benefits unless something is changed, according to the Social Security Finance Committee's official report.

It wouldn't run out if it were removed from the general fund and returned to it's own fund.