Gold’s hard-and-fast tumble below $1,100 an ounce last week means some investors may be tuning out the yellow metal or suffering from gold “burnout.”

But ignoring it is a huge mistake. It has been and always will be one of the best stores of value, and it's a crucial hedge against economic upheaval. It's a must-have holding.

Last Monday's "bear raid" in Shanghai brought gold down to 13-year lows before settling at five-and-a-half year lows, and it's absolutely vital that we know when this downward pressure will stop so that we don't "call a bottom" too quickly.

You see, we can buy gold all the way down, but these charts will help us see when it will resume its upward march…

The Lightning-Fast "Bear Raid" That Brought Down Gold

The timescales here are very short, with events unfolding by the second.

You see, around 30 seconds before the markets opened in Shanghai on Monday, July 20, at 9:30 a.m. local time (CST), gold fell $30 an ounce in a matter of four seconds, after which trading on the New York Comex exchange was halted for 20 seconds. It then plummeted another $40 before it was temporarily halted again.

By the second re-opening, trading retuned to something resembling "normal," but the (considerable) damage had already been done.

Here's a great chart from the researchers at Nanex that shows the action. Note that each horizontal line represents just 15 seconds of trading: 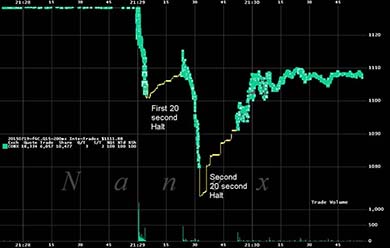 From this point on over the next several days, a veritable barrage of allegations hit the markets:

And so although we may never really know with any certainty who set off the frenzy, the undeniable truth remains that gold has slammed down through a key support area as shown on this chart: 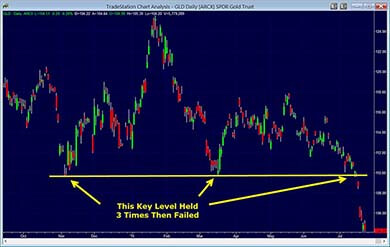 The question on most investors' and traders' minds is, "When will gold find a bottom and start trending up again?"