The Shanghai Composite Index fell 8.5% today (Monday) in the largest one-day drop for Chinese stocks since Feb. 27, 2007. The index is now down more than 27% from early June. 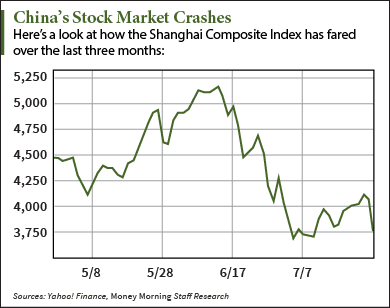 That wasn't the only Chinese stock market that suffered today. The Shenzhen Composite was down 7%, while the small-cap ChiNext index dropped 7.4%.

The Chinese government has tried dozens of strategies in the last month to try and prevent a stock market crash in China. Those included an interest rate cut by China's central bank, a halt on IPOs, and even a reduction in state media coverage of the Chinese stock market.

China's stock market had been on an absolute tear prior to this recent crash. From June 2014 through June 2015, the Shanghai Composite soared more than 150%.

Money Morning Capital Wave Strategist Shah Gilani saw how overvalued Chinese stocks were becoming and knew it was just a matter of time before they collapsed.

"You've heard the stories about the 1929 stock market crash, how investors should have figured out that, when taxi drivers and shoe-shine boys hawked stock tips, the end was near," Gilani said. "The lesson we're supposed to have learned was that cheap margin - the debt that investors can use to finance stock purchases, when wielded by uneducated, blindly optimistic 'plungers,' can drive stocks up and up over a cliff into an abyss."

Research from the China Securities Depository and Clearing Corp. Ltd. showed that in a two-week stretch in April, more than 2.4 million new brokerage accounts were opened in China. Since the beginning of the year, an average of 170,000 accounts have been opened each week.

"Almost every account that's been opened in China comes with a margin agreement and access to margin," Gilani said. "Margin lending is big business in China, as it is here in the U.S."

Millions of new investors flooded the market during a historic bull-run thinking stocks only go up. Now that they're crashing, there is panic in the Chinese stock markets.

But according to Gilani, you don't need to panic as the Shanghai Composite tumbles. In fact, with these investments, you can actually profit from China's stock market crash...

How to Profit from China's Stock Market Crash Today