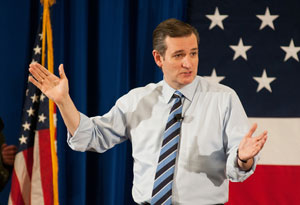 U.S. Senator Ted Cruz, Republican of Texas, speaks at the First in the Nation Leadership Summit in Nashua, N.H., April 18, 2015.

Ted Cruz net worth: Texas Republican Ted Cruz's net worth became the subject of debate in 2012. That's when Cruz and his wife, Heidi, poured their entire life savings into his campaign.

This hefty donation, however, paid off.

Cruz has been one of two Lone Star State senators since 2012 (the other is Republican John Cornyn) - and certainly the most famous of the duo.

He's particularly notorious for being an outspoken champion of abolishing the Dodd-Frank Law. Cruz adamantly claims that the regulations of the law hurt banks and other businesses.

But the banks holding Cruz's assets and savings certainly don't seem to be hurting. According to the Center for Responsive Politics, Ted Cruz's net worth is currently an estimated $3.2 million.

Here are a couple more details about Ted Cruz's net worth:

It will be interesting to peek at the next financial disclosure from Ted Cruz - CNN Politics just reported on July 25 that the politician received $15 million in support from two low-key Texas billionaires. Farris Wilks and Dan Wilks, who gathered their wealth in the fracking industry, donated the money to Cruz's super PAC "Keep the Promise," which will disclose its total election filings later this week.

Long-Term Crisis: Inability to Retire Comfortably... or At All: When will Social Security run out? It's a question the American public asks all the time. Finally, on July 22, the trustees on the committee gave us an answer. It wasn't what we wanted to hear...