Lindsey Graham Net Worth: Republican Senator Lindsey Graham of South Carolina has a much more modest net worth than many of his fellow 2016 presidential election competitors. 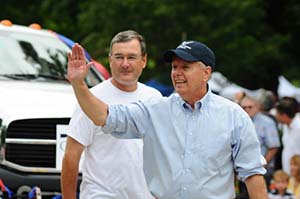 That is well below the average net worth of a U.S. Senator at $2.7 million. Graham's net worth is on par with the congressional average, however, at $1.02 million.

According to the Center for Responsive Politics, only Marco Rubio, Bernie Sanders, and Scott Walker have a lower net worth among those who have declared for the 2016 presidential election.

According to USA Today, Graham removed a Washington, D.C., home from his assets in his 2014 filings. The home was previously valued between $500,000 and $1 million. Removing that from his assets should drastically reduce his net worth when the 2014 statistics are released.

Graham has served as a U.S. Senator since 2003. He has been the senior senator of South Carolina since 2005. Before assuming office, Graham was a Judge Advocate for the U.S. Air Force.

Because candidates are only required to report personal finances in broad ranges, Lindsey's $1.02 million value is an approximation.