Here's a look at the Dow Jones Industrial Average today, earnings reports, the top stock market news, and stocks to watch based on today's market moves…

How the Stock Market Did Today 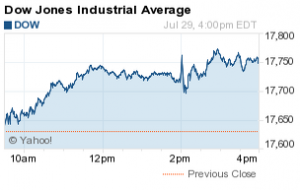 The Dow Jones Industrial Average today gained more than 130 points after the U.S. Federal Reserve said that labor conditions and the broader U.S. economy are improving and concerns about China's stock market temporarily abated. Today's statement sets the stage for a possible interest rate hike when the Federal Open Market Committee meets again in September. The central bank said that the economy is poised to overcome a first-quarter contraction, a decline in domestic energy process, and broader concerns in the global economy. Here's a breakdown of the Federal Reserve's decision, including an exploration of outside events that are impacting rate policy.

In disappointing news, the U.S. housing market hit a speedbump last month, with mortgage contracts to purchase existing homes falling in June after a strong run of five consecutive months of gains.