CNBC's Sara Eisen asked me last Tuesday if I was still bearish on one of Wall Street and Goldman Sachs Group Inc.'s (NYSE: GS) favorite stocks, even after it had already fallen more than 45% since I warned you last May that it was a bad investment.

"You know this environment, Keith," she told me. "People are paying up for growth companies. The bulls would say this has great brand presence, great brand awareness, and is continuing a careful and steady expansion in the U.S. and abroad."

All excellent points, I replied… but not one of them changes the fact that a tiny company taking market share from huge competitors in a non-growth market does not make it a growth stock.

Then I went for the jugular…

…if this company traded in line with its biggest competitor, the company's stock price would be only $0.66 a share, or 98.22% less than Goldman Sachs suggests.

Here's why this stock's bulls are still in for plenty of heartburn.

When I first pointed to Shake Shack Inc. (NYSE: SHAK) as an investment to avoid last May, the company was trading at roughly 1,200 times earnings – in an industry that had an average price/earnings (P/E) ratio of 40. That's come down to a forward P/E of "only" 376, according to Yahoo! Finance, now that the stock has fallen by 35%.

The bulls take this as a sign of encouragement, noting that the company's stock is somehow more reasonable at $60 a share than it was at $90.

Don't fall for it.

There's still plenty of potential heartburn on the menu.

Shake Shack remains a highly speculative company at best, and not the investment millions of people think it is. Here are five reasons why:

1. Insiders are bailing out.

Shake Shack recently filed for a secondary offering of up to 4 million shares on the eve of the expiration of the company's IPO lock-up period. According to U.S. Securities and Exchange Commission documents, sellers include Chairman Danny Meyer, Green Equity Investors VI, and LP SEG Partners LP, and the chain will not receive a dime.

If they believed Shake Shack stock was cheap and that the company had better days ahead, they'd be holding on or even buying more.

As I noted in this article, individual investors are the last in line when it comes to making money from initial public offerings.

Further, a company like Shake Shack couldn't have been brought public a decade ago when you had to have results rather than just "potential."

2. SHAK still trades at an unwarranted premium compared to the competition.

I realize this is hard to internalize, so let me break it down another way by using the value per restaurant as of last May. 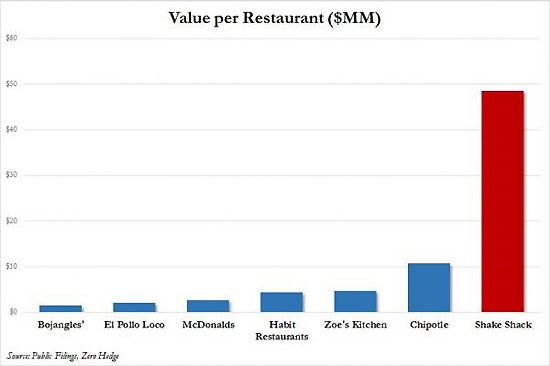 Do you really believe that Shake Shack is worth $50 million per location?

The markets didn't, and I still don't.

In fact, if the Shack is going to achieve a McDonald's-like valuation per location, the company would have to do this…