Pharmaceutical stocks have crushed the broader markets in 2015.

Pharmaceutical ETFs have soared as well.

Those numbers look particularly strong when you compare them to the broader markets. In 2015, the S&P 500 has gained just 2%. The Dow Jones Industrial Average has performed even worse, dipping 0.8% this year. 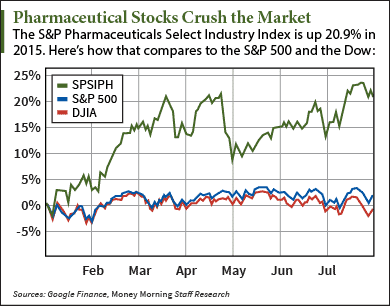 So why are pharma stocks outperforming the markets so drastically in 2015? Spending on pharmaceuticals is growing at an incredible rate - take a look...

In 2014, more than $374 billion was spent on prescription drugs in the United States, according to a report from the IMS Institute of Health. That was a 13.1% jump from 2013, and the highest growth rate in more than a decade, says ExpressScripts.

Here's a look at how U.S. prescription spending has grown in the last decade: 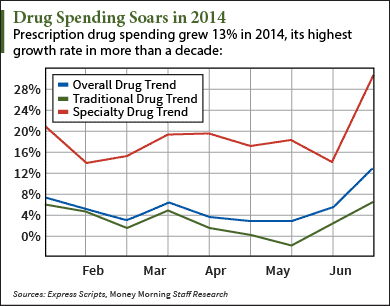 Most of the spending increase has come from specialty drugs, which are often accompanied by high price tags. The average price of cancer drugs in the United States reached $100,000 per year in 2012, according to the Mayo Clinic. Newer medications regularly top $150,000 per patient per year.

Expect pharmaceutical stocks to be the biggest beneficiaries of this spending. As the revenue of the largest drug companies continues to climb, the whole industry grows.

How to Profit from the Pharmaceutical Industry Now: The biotech and pharmaceutical industries are absolutely booming with M&A activity in 2015. In the first quarter alone, more than $166 billion was spent by Big Pharma companies. Best of all for investors, there is an investment that's tapped into this market. Few investors know of its potential, but it has already returned 23% in 2015. And that's just the start...