For July 30, 2015, here's a look at the Dow Jones Industrial Average today, earnings reports, the top stock market news, and stocks to watch based on today's market moves… 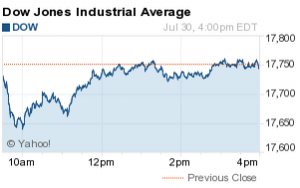 Down 5 points, the DJIA today had its flattest session in roughly two weeks as investors were mixed over the U.S. Commerce Department's announcement that the economy grew at a modest 2.3% in the second quarter of 2015. Investors also appear underwhelmed by June-ending earnings reports. Notable decliners today included Procter & Gamble Co. (NYSE: PG), down nearly 4%, Facebook Inc. (Nasdaq: FB), which slipped more than 1.5%, and Whole Foods Market Inc. (Nasdaq: WFM), which fell more than 11.8% to a 52-week low. But today's biggest decliner was oil company LINN Energy LLC (Nasdaq: LINE), which fell more than 26% after the firm announced plans to suspend its quarterly dividends in order to conserve money during a sharp downturn in oil prices.