On Monday, I showed you how to turn the recent sell-off in Apple Inc. (Nasdaq: AAPL) to your advantage.

But that's not the only way to exploit Wall Street's latest overreaction.

Today I want to tell about a company that has been a key part of the Apple's and the iPhone's smashing success - and, thanks to that, it's a tech stock currently out of favor on the Street.

But this play is more than just an Apple supplier. In fact, it's one of the best "pick-and-shovel" plays out there, because this firm's designs can be found in products made by some 300 companies.

Moreover, this British firm makes its money by licensing its technology to other companies.

I like to think of this as a "license to print money."

Let's figure out how to scoop up some of that cash ourselves...

As a longtime tech investor, I'm always on the lookout for great pick-and-shovel plays. These companies don't develop smartphones or video games or any other tech consumer product you'd be familiar with.

Their technology is invisible.

They develop the systems, semiconductors, and other "ingredients" that consumer tech companies need to operate more efficiently.

As boring as that sounds, remember this: About 300,000 "Miner Forty-Niners" came to California hoping to strike it rich during the Gold Rush of 1848-1855. But it was the merchants who discovered the real "mother lode" - by selling the picks and shovels the miners needed to pursue their dreams.

In other words, with pick-and-shovel plays, we get all of "gold's" upside - gold here being smartphones and other hot tech products - without the risk of backing the wrong "miner." 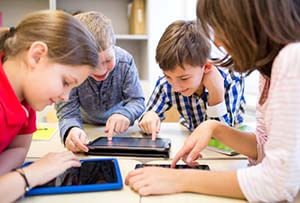 Founded in 1990, ARM revolutionized the semiconductor industry by pioneering "fabless" manufacturing - and it ranks as one of the world's very best chip design firms.

Fabless chip companies design - but do not manufacture, or "fabricate" - the semiconductors that make all of our digital devices possible.

By focusing on design, ARM avoids the huge overhead inherent in building and maintaining chip factories.

To put that in perspective, consider that Intel Corp. (Nasdaq: INTC) recently announced that it will spend a whopping $6 billion to upgrade one of its plants in Israel. In China, Intel is investing $1.6 billion to upgrade a plant in Chengdu - and that follows spending $2.5 billion on a plant in Dalian five years ago.

ARM avoids that process altogether. The British firm - probably the best known of the "Silicon Fen" companies based in and around Cambridge - makes its money by licensing its technology to other companies.

Like I said before, this is essentially a "license to print money."

Royalties and licensing account for more than 90% of sales, with the rest coming from services, software, and tools.

You can find ARM's designs in all iPhones and iPads. In that regard, the company has helped Apple become the most profitable mobile device maker in the world - by far.

But ARM doesn't stop there. Its designs also are in the flagship Galaxy smartphones from Apple archrival Samsung Electronics Co. Ltd. (OTCMKTS: SSNLF).

That's a lot of phones, but it still just scratches the surface. To date, ARM has signed more than 1,100 licenses with over 300 companies that have shipped more than 60 billion ARM-designed chips.

But don't take my word for it.

Let's have a look at how the company measures up...