For July 31, 2015, here's a look at the Dow Jones Industrial Average today, earnings reports, the top stock market news, and stocks to watch based on today's market moves... 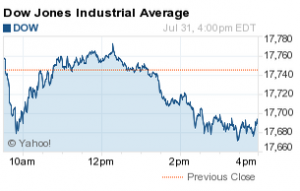 The DJIA today fell 55 points as energy commodity prices cratered, dragging down the sector, and investors considered the possibility that the U.S. Federal Reserve might push back its interest rate hike after weak wage data surprised the markets. The announcement that U.S. labor costs for the second quarter saw their smallest increase in 33 years came a day after the U.S. Commerce Department reported a lukewarm second-quarter GDP of 2.3%.