In typical herd mentality, investors have decided they love to hate resources.

Commodity prices crashed to a 13-year low in July as commodities became the most hated sector of the market.

For one, the largest developed economies in the world struggle to generate growth as they try to recover from the seven-year-old financial crisis.

Recent strength in the U.S. dollar, which prices most major commodities, hasn't helped, either.

But the cure for low prices is low prices. And it appears we're nearing the point of maximum pessimism. Opportunity could be just around the corner.

Here's how low commodity prices have affected major producers - plus a look at the factors that will drive prices higher...

It's little wonder a vast majority of investors are down on commodities.

Here's what the widely followed Thomson Reuters/Jefferies Commodity Research Bureau (CRB) Index, which tracks 19 commodities from aluminum to wheat, has done over the last five years: 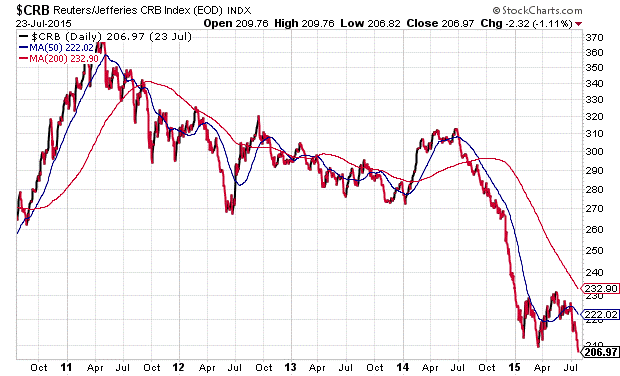 But that's not the whole story.

Look at what's been happening to some of the world's biggest diversified commodities producers.

Anglo American Plc. (LON: AAL) is a $10 billion multinational headquartered in London. It's the world's largest producer of platinum, accounting for about 40% of global output. It's also a major producer of diamonds, copper, nickel, iron ore, and coal.

Anglo recently announced it had lost $3 billion in H1 this year. Profits were down 36% over H1 last year. As a result of the seemingly endless rout in commodity prices, the company plans to cut 53,000 jobs, or 35% of its total workforce, over the next few years.

With the company's shares trading at their lowest in a decade, CEO Mark Cutifani seeks to put as many as 15 company assets up for sale.

These next two companies have been hard hit, too - but several signs point to better days ahead...

Excellent article. It feels as if people expect things we buy to go down every year. As if that makes sense.