Marco Rubio Net Worth: The finances of Marco Rubio were in the news earlier this year when the Republican senator from Florida cashed out nearly $70,000 in retirement funds.

That's usually viewed as a desperate financial move, particularly by members of Congress who have an average net worth of $1.03 million.

But according to the Center for Responsive Politics, Sen. Marco Rubio's net worth is far below the average member of Congress at just $443,508. Because candidates are only required to report personal finances in broad ranges, that figure is only an approximation. 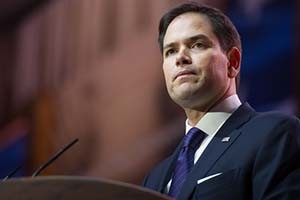 The average net worth for senators is $2.79 million. Rubio's net worth ranks 83rd among U.S. senators. He earns a standard Senate salary of $174,000 annually.

Rubio has been widely criticized for his financial habits. After publishing his book "American Dreams," Rubio quickly went out and purchased an $80,000 speedboat after paying off his student loans. His recent liquidation of his retirement account is said to have cost him roughly $24,000 in taxes and penalties.

Then in July, he sold his second home in Tallahassee, Fla., for $18,000 less than he originally paid for it.

The presidential hopeful is facing competition with much deeper pockets.

Among presidential candidates, only Scott Walker and Bernie Sanders have a lower net worth.

Trump might be the best candidate for business and the economy.