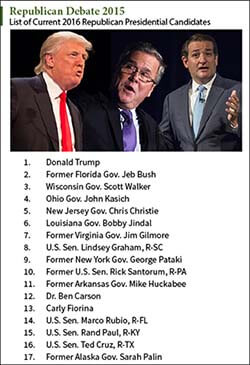 Updated Aug. 5: On Thursday, the nation's GOP candidates will square off in the nation's first Republican debate of 2015.

The event is slated for 9 p.m. ET on FOX News. It will feature the following top 10 candidates for the GOP nomination:

Here's what else we know about 2015's first Republican debate...

Setting the Stage for the First Republican Debate of 2015

He Ain't Poor, He's My Brother: Five Republican candidates recently attended the Koch brothers' conference to vie for the kind of funding that could alter the outcome of the 2016 presidential election. Here a look at how these presidential hopefuls fared...