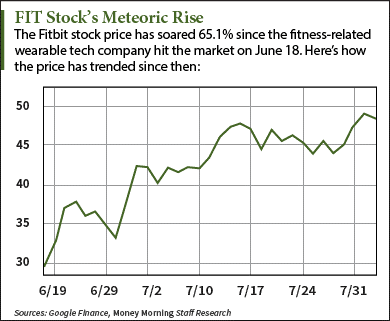 Fitbit Inc. (NYSE: FIT) releases its first earnings report as a publicly traded company after the closing bell tomorrow (Wednesday). These earnings are significant because the Fitbit stock price has skyrocketed since its June 18 IPO.

The Fitbit stock price is up 65.1% from its first-day close of $29.68 a share. The wearable tech firm keeps punching through new ceilings, hitting an all-time high of $48.96 a share just yesterday (Monday).

That makes Fitbit one of the best-performing IPOs of 2015.

The Fitbit stock price has seen a total return of 145% from its $20 offer price. According to Renaissance Capital, a manager of IPO-focused ETFs, that puts it in third place behind Shake Shack Inc. (NYSE: SHAK) and Spark Therapeutics Inc. (Nasdaq: ONCE), consecutively.

With Fitbit Q2 earnings coming up tomorrow, investors are wondering what to do with Fitbit stock now…

How Should I Play the Fitbit Stock Price?

The most bullish bank is Sitfel. They gave the Fitbit stock price a target of $57 a share. That would be a gain of 16.4% from yesterday's close. The firm cites multiple avenues for growth, including new products and international market penetration.

While Wall Street is clearly salivating over Fitbit shares, these banks can't always be trusted…

These firms are notorious for taking advantage of newly issued stocks by purposefully inflating their price in order to make quick profits.

"The IPO process is now a rigged game – one in which the founders, the early angel investors, venture capitalists, and the investment bankers all make out like bandits," noted Money Morning Chief Investment Strategist Keith Fitz-Gerald. "They don't give a rat's you-know-what about whether you make money."

Despite the rigged IPO investing process, retail investors like you and me can still gain handsomely from hot new stocks.

Alex McGuire is an associate editor for Money Morning who writes about upcoming IPOs. You can follow him on Twitter at @AlexMcGuire92.