For Aug. 4, here's why the Dow Jones Industrial Average fell, plus the top stock market news and stocks to watch based on today's market moves… 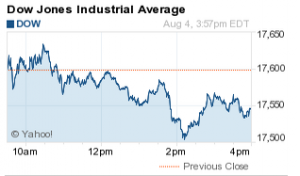 The DJIA today fell 47 points as investors parsed through earnings and data reports in preparation for Friday's jobs report.

Shares of Apple Inc. (Nasdaq: AAPL) hit a six-month low and continued to slump as the stock has fallen below two critical technical indicators. Apple stock fell another 3.3% as investors weigh concerns about the Chinese economy dragging down the tech giant's stock. According to research firm Canalys, Apple lost market share in the second quarter in the smartphone industry. Apple stock plunged below its 200-day moving average, suggesting the stock may have a ways more to decline.