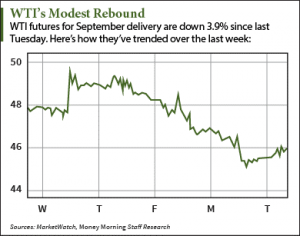 Meanwhile, the Brent crude oil price gained 1.47% to trade at $50.25 a barrel this morning. The international benchmark had an even worse sell-off than its U.S. counterpart on Monday, tumbling 5.2% to close at $49.52 a barrel.

"Prices may be recovering slightly this morning, but given the 1.5 to 2.0 million barrels per day oversupply generated by OPEC, the recovery will probably be short-lived," analysts at Commerzbank said in a note this morning. "The yearly lows… are likely to be put to the test over the coming weeks."

Between now and September, the number of active oil rigs will significantly shrink. That's because extraction levels from these wells peak within the first 18 months they're online. After that year and a half, their output rapidly declines.

That's why Moors sees oil prices climbing as high as $76 a barrel by the end of the year.

"Between July and September of this year, production will finally start to decline from the wells that were recently put on line," Moors explained. "Remember, these are the wells that have provided most of the excess volume."

"The translation? Eventually, the glut will recede, and the market is going to hand us some highly profitable plays in short order…"

Alex McGuire is an associate editor for Money Morning who writes about oil and natural gas. You can follow him on Twitter at @AlexMcGuire92.