For Aug. 6, here's how the stock market did today, earnings reports, the top stock market news, and stocks to watch based on today's market moves... 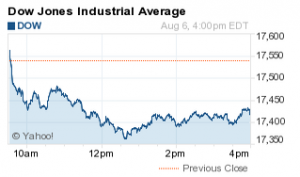 The Dow Jones Industrial Average today fell 120 points, while the Nasdaq slipped more than 1.6% after media and news stocks plunged as the latest round of quarterly earnings indicates more consumers are unplugging from cable. It was the sector's worst two-day performance since the financial crisis.

Shares of Viacom Inc. (Nasdaq: VIAB) slipped more than 14% on the day after the company reported a 44% decline in revenue for its film-entertainment division. Shares of New York Times Co. (NYSE: NYT) slipped nearly 3%, while Twenty-First Century Fox Inc. (NYSE: FOX) dipped more than 6.7% on the day. Meanwhile, shares of Netflix Inc. (Nasdaq: NFLX) gained 2.2% on the day as the company continues to benefit from consumers "pulling the plug."