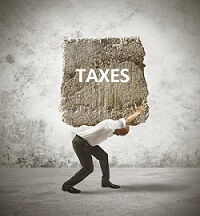 A Puerto Rico debt crisis of epic proportion is officially underway. The U.S. territory defaulted Aug. 3, handing over only 1% of the $58 million owed.

Puerto Rico owes $72 billion in total - a debt load that's by far larger per capita than any of the 50 states, and an amount that's $52 billion more than Detroit's bankruptcy two years ago.

But Puerto Rico's default is nothing compared to what's in store for American taxpayers - who have been misled by Washington into thinking the government's unfettered borrowing can go on forever...

"The Puerto Rico debt crisis should serve as a cautionary tale of how debt heaped upon debt, even to a U.S. Commonwealth, ultimately meets its reckoning," Money Morning Special Contributor Michael E. Lewitt told readers July 8.

You see, the irresponsible fiscal promises that caused Puerto Rico's default are being perpetrated by U.S. federal, state, and local governments every single day. Lewitt calls it a "Ponzi finance scheme" and notes it will "end very badly."

Of course, it's taxpayers that will be left on the hook for the government's multibillion-dollar mistakes...

Puerto Rico Debt Crisis Is Being Recreated on Your Door Step

First, here's a look at the Puerto Rico bond offering that was telling of the default to come...

This offer proved a complete lack of government responsibility.

You see, GO bonds are issued by state and local governments to raise funds for public works. They are backed by the government and are therefore supposedly low-risk.

"Investors who relied on the backing of the Commonwealth for their Puerto Rican corporate bonds were fools," Lewitt explained. "The allure of a triple-tax-free bond paying a high after-tax rate of interest in a functionally solvent municipal credit is a classic sign of late-cycle investor behavior."

Indeed, the Puerto Rican economy has shrunk by 11% since 2006. It has more per capita debt than any municipal entity associated with the United States. It also has no industrial base, and tourism comprises a surprisingly small part of its economy.

Yet still, the Puerto Rican government offered these bonds - and investors bought them.

"Puerto Rico is hopelessly insolvent," Lewitt said. "With no hope of ever repaying its debt, a March 2014 bond offering was used to repay some short-term obligations and let everyone pretend that Puerto Rico is not bankrupt for another couple of years."

Lewitt added that managers who have been buying this debt for their retail clients "should be ashamed of themselves."

"It is one thing for hedge funds and other professional investors to take these kinds of risks, but those wealth managers charged with protecting retail and high net worth money should have known better," Lewitt said.

It's ultimately Puerto Rican taxpayers that will have to shoulder the government's fiscal irresponsibility. And the same is happening in mainland United States...

The government is borrowing money and making promises at the taxpayer's expense.

It's a "Ponzi finance scheme" - and what happened in Greece, Detroit, and now Puerto Rico and Chicago serve as perfect examples.

Right now the state of Illinois is holding its breath waiting for a Supreme Court ruling on a lawsuit by workers aiming to overturn 2013 pension reforms. If they're successful, it could cost the state $145 billion in increased taxes over the next 30 years.

"They're going to have to socialize state and municipal risk, just like they socialized Wall Street's risk," Money Morning Chief Investment Strategist Keith Fitz-Gerald said in December 2013, after Detroit filed Chapter 9 bankruptcy earlier that year on July 18. "The bailout bonanza just got a whole lot more complicated, and potentially a whole lot more expensive for the average American taxpayer."

Other U.S. cities currently teetering on the brink of bankruptcy include Cincinnati, Camden, and dozens of others. Research by Bridgewater Associates, the world's largest hedge fund, estimates that 85% of public pensions could go bust within 30 years. Public pension funds currently have about $3 trillion in assets but will need to pay out nearly $10 trillion over the next several decades. To get there, they'll require 9% yields, yet returns in just the 4% range are far more likely.

How hard can a state squeeze its taxpayers before they leave? Americans will have to vote with their feet and flee to fiscally responsible states.

But on a federal level, we face a wide-scale societal decline.

Puerto Rico Debt Crisis Breakdown: The U.S. territory revealed Aug. 3 it made only $628,000 (1%) of a $58 million debt-service payment that was due Aug. 1 - marking the largest municipal default in U.S. history. "It's about math, not politics," Gov. Alejandro García Padilla commented that day. These four charts put into perspective exactly how much Puerto Rico owes...