And it seems the gold bears dominate the headlines - everywhere you look, each news item seems more negative than the last.

But all this negative buzz really belies excellent fundamentals. The truth is, we're so close to the bottom right now that we've got one of the best chances to buy gold we've seen in a decade.

Sunday, July 19th, while many markets were closed and few traders were around, some $2.7 billion in gold was sold off on the COMEX in less than two minutes. Ross Norman, CEO of bullion broker Sharps Pixley, commented "...they weren't looking for the best price, they were looking for the biggest impact."

Indeed, that's exactly what they got.

On the Friday just before, China announced its official gold reserves had increased by 57% to 1,658 metric tons, up from the previous 1,054 metric tons reported six years ago.

That underwhelming announcement of Chinese gold reserves may have contributed to the subsequent sell-off. And that may have been exactly the intention.

A recent survey by Bank of America Merrill Lynch shows a small majority of money managers consider that "gold is undervalued" around $1,155 an ounce.

The survey asked 150 top fund managers worldwide with about $400 billion under management. 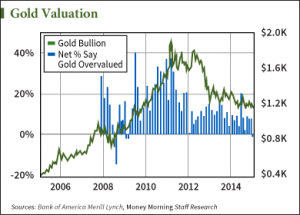 While the bullish majority is just 1% ahead of the bears, the shift itself is nonetheless impressive.

According to Merrill, the last time sentiment was bullish dates back to 2009, just before gold began an impressive two-year 90% run-up.

Interestingly, this sentiment has also begun translating into action, at least for some.

In Q1, Canadian mutual fund company CI Investments acquired a massive 6,117,900 shares of the SPDR Gold Trust ETF (NYSE Arca: GLD). That boosted CI's position by about $700 million to roughly $735 million in total to become CI's largest position, representing about 7.5% of CI Investments' portfolio at the end of the first quarter.

Even Swiss banking giant Credit Suisse added over 4 million shares to its own position, as did Blackrock Group, Morgan Stanley, and Lazard Asset Management, all of whom are multi-asset managers rather than precious metals specialists.

what will gold sell for next year?

Good article. Thanks for acknowledging, if not exactly trumpeting, the manipulation of the gold price, which so many others continue to ignore or deny.

Re: GLD, I think people need to know that the custodian is HSBC. That's Hong Kong Shanghai Bank Corp., set up by the British to finance the importation of opium to China in the mid 1800s, opium the Chinese government wanted to keep out and the British forced them to allow in via two Opium wars.

And HSBC is still active in facilitating the drug trade. They recently paid a $1.9 billion dollar fine for laundering drug money for the Sinaloa cartel in Mexico. Of course, no one went to jail.

More importantly for gold investors, HSBC has been one of the primary firms involved in the gold suppression scheme.

For a trade, sure, GLD is okay I guess, but when you hold GLD, you're AT LEAST two steps removed from actually owning actual gold. I consider it just another form of "paper gold." And, if push comes to shove and there's a rush to acquire ACTUAL physical gold, you may find out that GLD doesn't exactly have the actual amount of ACTUAL physical gold it claims to have.

These people are known crooks. They were created to faciiltate crime and they still facilitate crime. Why would you trust them to hold your valuables?

And that's nothing compared to the crimes they and many others have committed in their rigging of Libor, Treasury markets, foreign exchange, the energy markets, the metals markets, and their manifold transgressions in the mortgage markets. Throw in a lot of sleazy deals like what JPMorgan did to Jefferson County Alabama and what Goldman gave us with the Greece sleight of hand and yeah, you might just draw the absolutely ciorrect conclusion that not many banks … and certainly no too big to fail/jail banks are to be trusted.

NO government is to be trusted EVER. They all lie, cheat, steal, enslave, and murder.

Politicians are sociopaths by definition with precious few exceptions. I used to be a broker and I can tell you it's a very very sleazy business. Had to get out. You should get out too before you're Corzined.

So, yeah Gary, I think you have a solid point there.

Fallingman,
What kind of broker were you? A gold broker? If so, what are your thoughts on gold today, and where specifically to buy "private" gold?