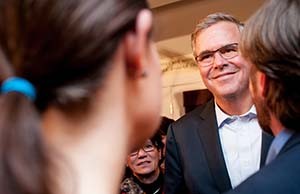 Jeb Bush Net Worth: We already know that former Florida Gov. Jeb Bush is worth a lot of money - $22 million currently, according to a June 20 statement from his campaign. But Bush didn't amass this wealth because his political career advanced. As a member of the Bush dynasty, he was born into affluence - and politics, for that matter.

As a 2016 presidential nominee, Bush doesn't shy away from discussing his personal wealth. In fact, he has been more transparent with his money than most rivals. And it was Jeb Bush's early disclosure of personal finances that brought the issue of candidates' private wealth into the limelight, according to a July 30 article in The New York Times.

Tax records released July 30 revealed Bush reported $28.5 million in adjusted gross income from 2007 - the year he left the office of Florida governor - through 2013. Ten million of this amount came solely from speaking engagements.

During these speaking engagements, Bush regularly addressed his high net worth and spun it in a positive light. Bush has said he's proud to pay taxes on time and, according to a July 5 article in National Journal, hands over a whopping 36% of his income. He also reminded supporters he regularly contributes to charity, and that, when he was Florida governor, he raised the state's credit rating to AAA.

Fiscal responsibility has paid off. Jeb has amassed $114 million for his campaign. The money mainly came from all those speaking engagements, plus contributions made to his super PAC (Right to Rise). Texas oil barons, New York investment bankers, Miami healthcare company owners, and three former ambassadors gave Right to Rise 25 contributions of $1 million or more each.

Of the $114 million, Jeb has only spent $16 million. Of course, that's pocket change for Jeb's biggest rival in the race, Donald Trump.

I've Been Rich and I've Been Poor... Rich Is Better: New Jersey Gov. Chris Christie doesn't consider himself wealthy. Rather, he considers himself "not wealthy" by "current standards." He also thinks the concept of wealth is subjective. Here's what Chris Christie's finances look like...