For Aug. 7, here's what the stock market did today, earnings reports, the top stock market news, and stocks to watch based on today's market moves... 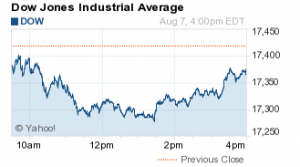 The Dow Jones Industrial Average fell 46 points today after the July jobs report indicated the "official unemployment rate" sits at 5.3%, a seven-year low. Investors were cautious and believe the seven-year low could provide justification for the U.S. Federal Reserve to raise interest rates in September. The Fed Open Market Committee will meet again to discuss monetary policy on Sept. 15.

However, the report wasn't all good news. A record 93,770,000 Americans are not in the labor force, which means they have effectively given up their job search. The workforce participation rate is at a 38-year low of 62.6%, and a record 56,209,000 women are out of work.