Since the last bona fide financial bubble, the real estate and credit bubble of 2007 to 2009, it seems like every time anyone pays a few pennies too much for a stock, there is a flock of analysts ready to start crowing "bubble!" like so many birds on a wire.

I believe that any pundit who calls a sector or market a "bubble" when they really mean "fundamentally or technically overbought" should be banished from pontificating until the real bubble appears.

That's no hollow gripe: These talking heads can do serious damage with their flawed analyses. Regular investors who heed their bad advice can end up prematurely exiting what are in fact strong, lucrative positions, leaving billions in upside on the table.

Besides, when you have the facts on your side, like we do, you can easily see that the markets are nowhere near bubble territory.

And the charts I have to show you prove it...

These Facts Tell Me to Stay Invested

I recently appeared on Neil Cavuto's show on FOX Business to argue that "bubble" is one of the most overused words in the financial media, and I also debunked the tech bubble myth.

But now we can dig a little deeper and look at three clear, easy-to-understand metrics that tell us that current tech companies may be overvalued, but are not showing the signs of excess - the very definition of a bubble.

Big tech is earning the big numbers: Practically everyone agrees that big tech is actually earning its valuations.

Apple Inc. (Nasdaq: AAPL) is certainly not overvalued; its recent drop took it down to a trailing 12-month price/earnings ratio (P/E) of 13.3. Google Inc. (Nasdaq: GOOG) has also been putting up huge earnings numbers. Even though, at 29.7, its P/E ratio is higher than Apple's, they are very different businesses (especially in terms of capital intensity, working capital, etc.), and Google remains a cash flow monster. So it's really difficult to make a case that big-cap tech is anything more than an overvalued sector.

Venture capital (VC) sees some high valuations, but no bubble: VC firms are no strangers to "overinvesting at the top," as they did in 1999 and 2000, but most experts see firms as much more savvy in managing the numbers during this more recent bull market. According to deal analytics firm Mattermark:

"Traditional venture capital deals are holding steady for traditional Series A through D, with a small set of outliers successfully negotiating for more favorable ownership or outsized rounds in the last quarter. Some VCs are simply sitting out on deals they expect will be over-priced."

Series A through D are progressive pre-IPO funding rounds for startup companies from earliest (A) to latest (D). So some of the smartest teams in the business are showing restraint, which doesn't point to bubble valuations from a VC perspective.

IPOs are of higher quality - and the rate of offerings is slowing: One of the key benchmarks for classic irrational stock market exuberance (with apologies to former Fed Chair Alan Greenspan) is the number of companies coming to the equities markets in search of funding. During highest market valuations, more and more companies seek the "easy, eager money" that becomes available.

Here we see the most compelling case against those calling the current situation a tech bubble.  Let's look at both the quantity and quality of tech IPOs that have come to market in 2015.

One of the most interesting phenomena that we see in the IPO market is a definite trend toward stronger and more established companies coming to market. We can see this visually in two very useful graphics. The first shows the median annual revenue for tech IPOs: 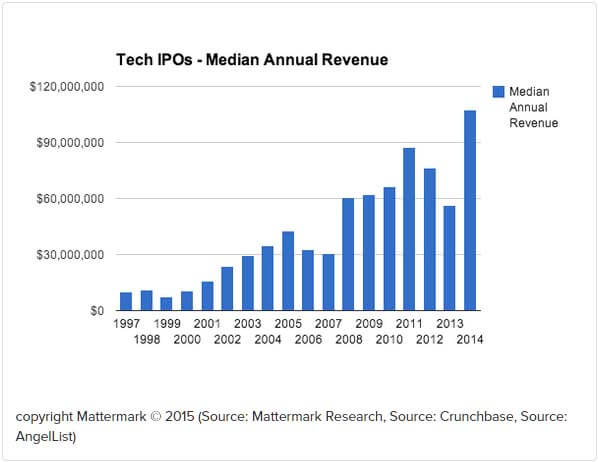 This clearly shows that fewer "concept companies," that is to say, those firms with a big idea but low or no revenue, are hitting the IPO market.

Even more informative is the next chart from Danielle Morrill at Mattermark. It was made in 2014, and I've got updated numbers to show you, too.

Sir, very compelling reason given by you to stay invested. However some hedge fund manager in CT such as Jim ric are calling for market crash once the fed raises rates. Why it is so i am not convinced. Would appreciate your views on that front. Will market crahs?