In a statement Monday, Warren Buffett explained, "I've admired PCP's operation for a long time. For good reasons, it is the supplier of choice for the world's aerospace industry, one of the largest sources of American exports." 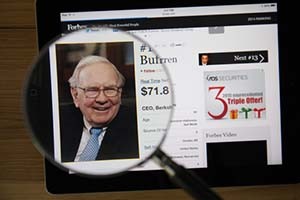 Under terms of the deal, Berkshire Hathaway pays $235 per share for all Precision Castparts Corp. (NYSE: PCP) shares. That's a 21% premium to PCP's Friday closing price of $193.88.

Berkshire has been a Precision Castparts shareholder since 2012. Its 3% stake prior to the deal made it one of the PCP's largest shareholders.

The move suggests Buffett and his team are bullish on the global outlook for the aerospace sector, and Precision Castparts' role in the space.

What Is Precision Castparts?

Precision Castparts manufactures a vast assortment of metal parts used in products that include aircraft engines and gas turbines. It also produces pipe and fittings for the power business.

Headquartered in Portland, Ore., Precision Castparts employs 29,350 at 157 manufacturing facilities across the globe. The company derives some 72% of its revenue from its aerospace unit, 15% from its power business, and 13% from general industrial customers and other industries.

A Precision Castparts addition to Berkshire's conglomerate is expected to be a good fit, nicely complimenting other industrial acquisitions inked over the last decade. In March 2011, Berkshire purchased chemical maker Lubrizol for $9 billion. In 2007, Berkshire bought the remaining shares it didn't own in industrial manufacturer Marmon for $4.5 billion.