For Aug. 11, here's a look at the Dow Jones Industrial Average today, earnings reports, the top stock market news, and stocks to watch based on today's market moves… 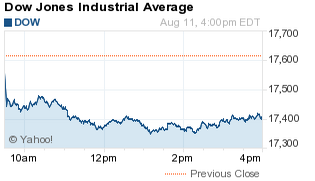 The Dow Jones Industrial Average today plunged more than 212 points after China elected to devalue its yuan currency by 2%, the largest such decline in nearly 20 years. Companies with exposure to the world's second-largest country suffered most, including General Motors Co. (NYSE: GM), which declined more than 3%. The Nasdaq dropped nearly 1.3%, with tech giant Apple Inc. (Nasdaq: AAPL) cratering more than 5%.