Hillary Clinton announced her "college affordability plan" on Monday, Aug. 10. The plan will be the focus of her policy platform. According to an Aug. 10 FOX News post, the Clinton College Affordability plan consists of the following three components: 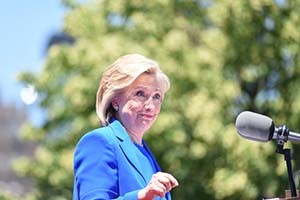 Former Secretary of State Hillary Rodham Clinton announced her intention to seek the 2016 Democratic nomination during a July 13 rally in New York City.

Clinton announced the plan at a town hall meeting in New Hampshire – the state with the highest amount of student debt in the nation at an estimated $33,000 per student average, according to The Washington Post.

TIME magazine featured key components of Clinton's plan. A simpler aid application process, a streamlined repayment process, and a current borrower refinancing initiative at lower rates were on the list.

Clinton did not specify how the aid application process would be simpler, though she did stress that families eligible for Pell Grant subsidies would find out their qualification statuses earlier.

However, with regards to the streamlined repayment process, Clinton called for the creation of a Borrow Bill of Rights. This bill would allow borrowers to enroll in a program that caps loan repayments at 10% of income and forgives anything outstanding after 20 years.

Jeb Is Rich! We already know that former Florida Gov. Jeb Bush is worth a lot of money – $22 million, in fact. But Bush didn't amass this wealth because his political career advanced. As a member of the Bush dynasty, he was born into affluence – and politics, for that matter. Here's more on Jeb's net worth…

It seems that Her Thighness, Cankles Clinton is trying to out socialist the Socialist, Bernie Saunders.

And how is the criminal Hillary Clinton planning on paying for this wonderfulness?