While concerns about iPhone sales are always valid - Apple Inc. (Nasdaq: AAPL) does draw the majority of its profits and revenue from its iconic smartphone - the bite out of AAPL stock since the company's Q3 earnings is overblown. 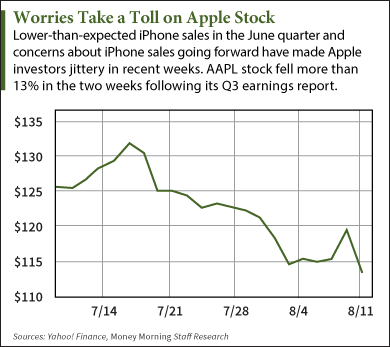 The latest AAPL stock price drop started when the Cupertino, Calif.-based company reported iPhone sales of 47.5 million in the June quarter. That missed Wall Street expectations for 48.8 million (the whisper number was even higher, at 50 million).

The next day, Apple stock fell 4.22% to $124.66 for the session. Over the following days concerns deepened, taking the AAPL stock price down further.

Wall Street suspected that Apple Watch sales, which the company did not break out separately, were faring badly. And news that Apple had slipped from first to third in the Chinese smartphone market amplified worries about the iPhone.

Bank of America Merrill Lynch (NYSE: BAC) downgraded AAPL from "Buy" to "Neutral," predicting that sales of the new iPhone models due Sept. 9 won't match those of the high-flying iPhone 6 models.

By Aug. 4, the Apple stock price had sunk to $114.12. The financial media fixated on the $90 billion decrease in Apple's valuation. And the slide conjured up thoughts of Apple's 2012-2013 slump, when the stock plunged 44% in seven months.

And the Apple bears may not be done yet. Money Morning Options Expert Tom Gentile thinks Apple stock could fall as low as $106 this time around.

But in the long run, the Apple stock price will bounce back. And several of Money Morning's top experts, including Gentile, see AAPL hitting $200 a share within the next couple of years.

"Three to five years from now, the current drop is going to be nothing more than a blip," said Money Morning Chief Investment Strategist Keith Fitz-Gerald.

Here's why the big-picture case for Apple is much stronger than it looks at the moment...

OVERREACTION OR START OF A BEAR MARKET ?

I for one do not plan to ride Apple back to below $100.0 share which is where the P & F Charts predict its headed to before the correction is over. While it probably won't go much lower than that, you never really know for sure. Hence the need to protect some of your gains with trailing stops. The level you set depends on how long you have been in your position and your basis cost. I rather protect some of my gains thus far.