The Alibaba stock price was down as much as 8.2% today after the Chinese e-commerce company had a weak earnings report. Shortly after the opening bell, Alibaba Group Holding Ltd. (NYSE: BABA) hit an all-time low of $71.03 per share.

Investors were disappointed with Alibaba's revenue figures. Alibaba reported revenue of $3.26 billion for the quarter, which missed estimates of $3.39 billion. 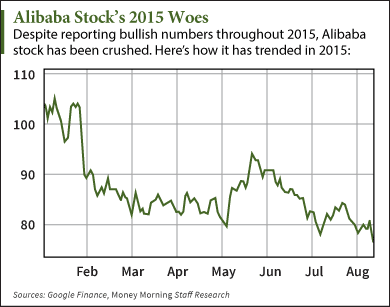 While revenue was a letdown, earnings per share (EPS) beat. EPS was reported as $0.59, which topped estimates of $0.58. And sales still grew an impressive 28% in the quarter.

That wasn't the only bullish figure…

Mobile figures, which have become some of the most important metrics for the company, were also impressive. Mobile transactions now account for 55% of Alibaba's total transactions. That was up from 51% last quarter and 33% last year.

Alibaba now has 307 million mobile users. That's up 63% from last year, and it's almost equal to the entire population of the United States.

So why is Alibaba stock falling when most of the numbers are bullish?

Why the Alibaba Stock Price Is Down, and Why It's Still a Buy Now

The problem is two-pronged…